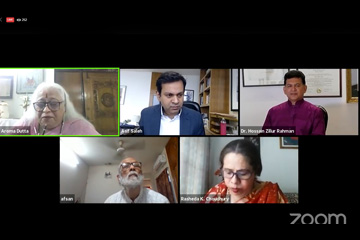 Non-governmental organisations must be united to continue sustainable development of future Bangladesh and ensure timely and quality services for the grassroots. Effective collaboration between the government and NGOs is also a prerequisite to sustain the fruits of development. These observations came from the speakers at an online discussion, marking 49th anniversary of BRAC.

As the nation counts down to celebrate the 50th anniversary of the great independence of Bangladesh, BRAC, one of its largest development partners, is also completing the 49th year of its establishment. To mark the occasion, BRAC organised an online discussion session titled “Bangladesh and BRAC: Collaboration for development” today on Sunday (21 March).

Its graduation model to tackle extreme poverty through combined services of handing over assets for income generation, livelihood and life skills training, health and education is now implemented by many agencies and governments across the globe in 46 countries. In the last nearly five decades, BRAC maintained the journey of liaison with the government of Bangladesh and other partners to bring essential services and opportunities for self-development at the door of the marginalised and poorest people.

Having praised BRAC for its role in empowerment of women reducing gender discrimination, lawmaker Aroma Dutta said in her discussion, “Bangladesh today is the best example of women empowerment in the world. Certainly, there were government initiatives, but it is BRAC that has brought the most remarkable changes at the field level. The government also expects BRAC’s cooperation in these initiatives.”

Speaking on BRAC’s role in achieving universal education in Bangladesh and its future strategy, CAMPE executive director Rasheda K Choudhury said, “It’s as though BRAC, Bangladesh and Abed Bhai have become synonymous. BRAC was at the heart of non-formal education. Yet why did Abed Bhai (Sir Fazle Hasan Abed) create a separate platform of CAMPE? He actually came up with the idea of forming this new coalition in the 1990s with the objective to put pressure on the government to focus on the development of the education sector. And it was a success. With the CAMPE’s initiative, students going to NGO-run schools began to get government textbooks for free from 2009.”

Eminent researcher and senior journalist Afsan Chowdhury commended BRAC for its collaboration with the government in implementing the national social development policies. “BRAC is formulating its action strategies keeping in view the demands of the people of this country and not giving priority to the western ideas of development. On the programme BRAC initiated for the ultra poor communities, Abed Bhai used to say that the programme would benefit the extreme poor to become self-dependent instead of becoming burdened with loans. He took initiatives to develop market for the poor.”

BRAC chairperson Dr Hossain Zillur Rahman focused on the organisation’s strategy for poverty alleviation and better living standard. “The greatest achievement of BRAC and Abed Bhai is that they have consolidated the role and work of NGOs in Bangladesh and by doing that they inspired the grassroots people to become self-confident.”

“Focusing on the opinions of the marginalised people in formulating their action strategies and taking up own income generation initiatives instead of depending on donor assistance are the two other major achievements,” he further observed, saying that the latter idea is the genesis of social enterprises in the development sector.

BRAC, partner NGOs to mobilise communities in 38 districts under high ...

BRAC-BUHS rapid assessment on impact of covid-19 on essential healthca...

More in this category: « BRAC wins ICMAB Best Corporate Award BRAC stands by the victims of Rohingya camp fire in Cox's Bazar »
back to top