Economist and social thinker Dr Hossain Zillur Rahman is a leading policy voice of Bangladesh with over three decades of experience within and outside government. Holding a masters in economics from Dhaka University, and PhD in political sociology from the University of Manchester, UK, Dr Rahman was a leading researcher at the Bangladesh Institute of Development Studies between 1977 and 2000, and led the internationally renowned Analysis of Poverty Trends project (1989-98). In 1996, he founded the think tank Power and Participation Research Centre (PPRC) and has been its executive chairman since 2000. He was the lead consultant for the preparation of the first poverty reduction strategy paper, Unlocking the Potential, 2005, of the Government of Bangladesh and was a member of the SAARC Poverty Commission. Dr Rahman has also sat on the board of the central bank.

He has been a consultant to international organisations such as The World Bank, ADB, DFID (now FCDO), JICA, JBIC, UNDP, UNICEF, SIDA, SDC, WFP and UNFPA. As a regular resource person at the National Defense College, Dhaka, Dr Rahman lectures on nation-state system, world economic scene, national security and sustainable development. He is also the convener of civic platforms such as Health Bangladesh, and Safe Roads and Transport for All (SROTA).

On 9 January 2008, Dr Rahman was appointed as an advisor to the former caretaker government of Bangladesh and put in charge of the ministries of commerce and education. He served till the end of the tenure of this government on 6 January 2009, and was credited with a lead role in the successful return of electoral democracy to Bangladesh.

He was awarded Dr John Meyer Global Citizenship Award by the Institute for Global Leadership of Tufts University, USA, in November 2009. He became one of the three awardees of the Gold Medal Award 2013 of Rotary International Bangladesh for his services to humanity. Adv Syeda Rizwana Hasan is an enrolled lawyer with the Supreme Court of Bangladesh. She works for the cause of environment as the Chief Executive of the Bangladesh Environmental Lawyers Association (BELA), a reputed national NGO. Her main focus is on promoting the notion of environmental justice in Bangladesh. Ms Hasan did her masters and graduation in law from the University of Dhaka with distinction. She started her career with BELA in 1993 and till today is continuing with the same organisation. As the Chief Executive of BELA, Ms Hasan is responsible for the overall coordination of the activities of BELA, including research, awareness raising, public interest litigation (PIL), and advocacy. She has filed PILs on various environmental issues, most of which have received favourable orders/ judgments. She has fought against vehicular pollution, river pollution, industrial pollution, ship breaking, grabbing of wetlands, cutting of hills, unregulated mining, unplanned urbanisation, commercial shrimp cultivation, deforestation, and loss of biodiversity. Her cases are redefining the current notion of development that is devoid of environmental consideration. Since she is an anthropocentric environmentalist, her efforts are adding value to conventional human rights movement by bringing in the elements of environmental justice. She places people’s legitimate rights at the center of her activism. BELA received the Global 500 Roll of Honours of the UNEP in the year 2003, and in 2007 won the Environmental Award given by the Department of Environment for popularising environmental law. Ms Hasan is a recipeint of the prestigious Goldman Environmental Prize. She has been named as one of the 40 Environmental Heroes of the World by TIME magazine. Recognising her impassioned leadership, hard-driving skill, and uncompromising courage in the campaign of judicial activism that has demonstrated that the right to environment is nothing less than a people’s right to dignity and life, Ms Hasan was awarded the Ramon Magsaysay Award in 2012. Adeeb H Khan qualified as a Chartered Accountant in England in 1991 and has been Senior Partner of Rahman Rahman Huq (Member Firm of KPMG International) since 2012.

He has been a Council Member of the Institute of Chartered Accountants of Bangladesh (ICAB) since 2013. He was the President of ICAB for 2017. He is a member of the Executive Committee of Bangladesh Legal Aid and Services Trust (BLAST), perhaps the largest legal aid organisation in Bangladesh. He is serving his third term as an Executive Committee (EC) member of Metropolitan Chamber of Commerce & Industry (MCCI), the oldest and one of the most prestigious trade chambers of Bangladesh, chairing its Taxation Sub-Committee. Mr Hassan co-founded a premium clothing label called Ninety Percent, launched in 2018, that shares ninety percent of its distributed profits between social and environmental causes, along with the people who are involved in making the clothes. He is the co-founder of Children’s Hope, an NGO that works to educate slum children in Dhaka. Melissa Dawn Parke has over two decades of experience in international law, politics, sustainable development, humanitarian affairs, human rights and governance. She served as Minister for International Development and is a former federal member for Fremantle.

Prior to entering the Australian parliament Ms Parke served as an international lawyer with the United Nations for eight years in Kosovo, Gaza, New York and Lebanon. Following her retirement from parliament, she worked as an ‘Eminent Expert on Yemen’ for the UN Human Rights Council.

Ms Park is an ambassador for the International Campaign to Abolish Nuclear Weapons, and a member of the Advisory Council of the Australian Centre for International Justice. Fathima Dada has worked in education throughout her career. She has worked as a teacher, lecturer, university external examiner, children’s author and textbook author. Her books have sold over a million copies.

Ms Dada has held almost every level of job in the education industry - from strategy, global product management and marketing, to production and design, sales and sales strategy in the roles of MD, CEO and chairperson. She is currently the managing director of Oxford Education and chairs the Board of OxfordAQA qualifications.

She has also been involved with government and non-governmental work in policy, curriculum, assessment, qualifications and implementation. She has served on several ministerial committees and overseen education reform and policy development in several countries, including working for UNESCO to support education systems in Mozambique, Malawi and Zambia. She has been a council member on the Schools and Vocational Quality Assurance authority in South Africa for 10 years. She helped lead the transformation to sustainability of the education programme of BRAC in Bangladesh.

Ms Dada is on the Board of Oasis Asset Management, and has previously been an active Board member to affordable school chains ie, Omega (Ghana), Spark (South Africa),Bridge (Kenya) and Zaya (India). She is the chairperson of Africa Ignite, a non-profit working for rural community development, and a trustee of MIET, a non-profit working with children in Africa. During the last Caretaker regime, Mr Chowdhury was an Adviser (Minister) responsible for the Ministry of Power & Energy, Youth & Sports, Food & Disaster Management and Science & ICT.

The Government has recognised him over the years as one of the highest individual taxpayers of the Country. He is a Graduate of University of Dhaka and completed many advanced level courses on Business Management and Strategic Planning from U.K. Dr Fahmida Khatun is currently the Executive Director of the Centre for Policy Dialogue (CPD), a leading think tank in South Asia. She has accomplished her Bachelors and Masters in Economics from Jahangirnagar University, Bangladesh. She did another Masters in Environmental and Natural Resource Economics and PhD in Economics from the University College London, UK. She did her Post-Doctoral research at the Earth Institute, Columbia University, USA. She was a Visiting Fellow at Christian Michelsen Institute, Norway, Korea Institute for Industrial Economics and Trade, South Korea and Center for Study of Science, Technology and Policy, India.

Dr Khatun’s areas of interest include macroeconomic policy and management, climate change and environmental economics, financial sector, international aid effectiveness, international trade and WTO issues, youth employment, gender issues, interests of Least Developed Countries, and Sustainable Development Goals. She has published extensively at home and abroad. She is a columnist to the Daily Star and contributor to the East Asia Forum.

She was a Director of the state-owned Janata Bank Limited during 2008-2011, and of the SME Foundation of Bangladesh during 2010-2013. She was a member of the Panel of Economists for the Eight Five Year Plan of Bangladesh Planning Commission. 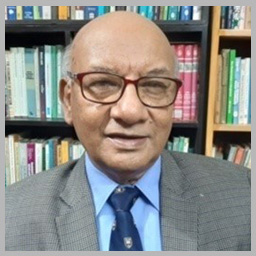 Professor Mandal was the Vice-Chancellor of Bangladesh Agricultural University (BAU), Mymensingh, during 2008-2011. He worked for the Bangladesh Planning Commission first as member of General Economics Division during 2000-2001 when he led the mid-term evaluation of the Fifth Five- Year Plan and completed the background studies for the Sixth Five Year Plan. He served the Planning Commission for the second term as member for Agriculture, Water Resources & Rural Institutions Division during 2011-2013 when he was involved in the evaluation and approval of many high profile projects relating to Blue Gold project, capital dredging of the Jamuna river, rural development, food security and poverty reduction.

Until recently, Professor Mandal was a government nominated member of the Board of Directors of the Krishi Gobeshona Foundation (Agricultural Research Foundation and also a Trustee of the Bangladesh Krishi Gobeshona Endowment Trust (BKGET) of the government. He also worked as a Senior Advisor to Food and Agriculture Organization of the United Nations (FAO) in Bangladesh during 2015-2016.

He led many collaborative research projects with international funding and published his works widely as journal articles, reports, books and monographs. His co-edited book on “Rural Mechanization: A Driver to Agricultural Change and Rural Development” and his book in Bangla ‘Unnoyoner Golpo’ have been widely acclaimed. His edited Bangla book “Bangladesher Krishi Orthoniti- Bishoy O Bisletion” , first of its kind, is published by UPL. His extensive research works on irrigation institutions and water market significantly contributed to the consolidation of the privatisation policy for minor irrigation development of Bangladesh during 1990s. He has 86 published papers and book chapters, 72 conference papers and research reports and 13 books and monographs. He has received many prestigious awards.

He has worked as a visiting professor in many universities abroad including School of Development Studies of the University of East Anglia, UK in 1997 and 2000, and Faculty of Life Sciences of the Rhine-Waal University of Applied Sciences, Kleve, Germany since 2013 through 2017.

More in this category: « Annual Report and Publications Executive Management »
back to top